The Aerial Lift Bridge was lit up in teal this past weekend to raise awareness for ovarian cancer.  Along with a (near) full moon, it made for a beautiful display. 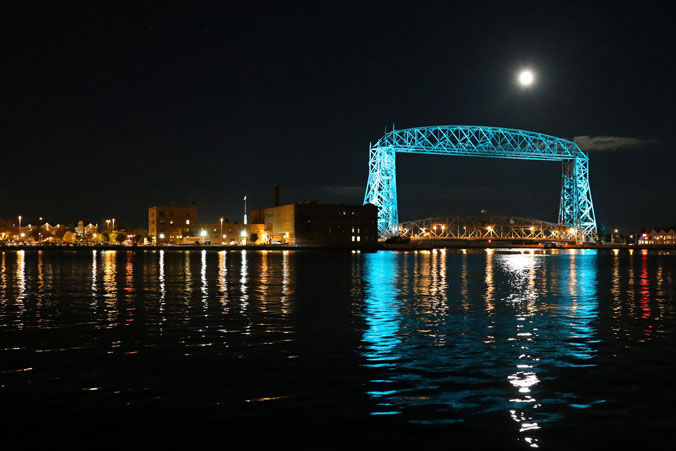 The parade sails during the Tall Ships Duluth Festival was a little different from previous festivals.  Included in this year’s event, the world’s largest rubber duck.  Can you spot him in the photo below? 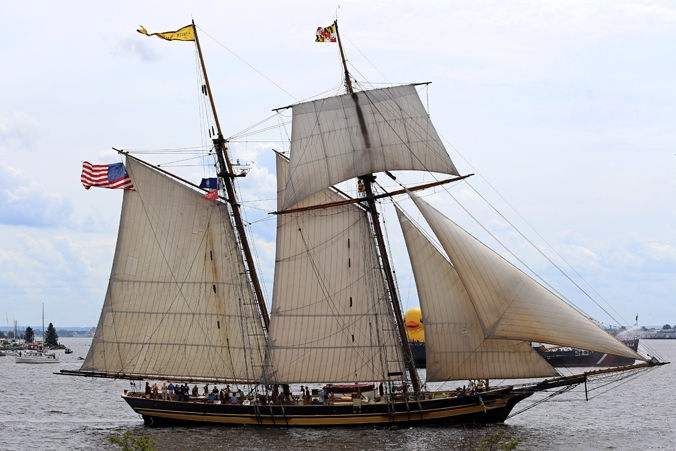 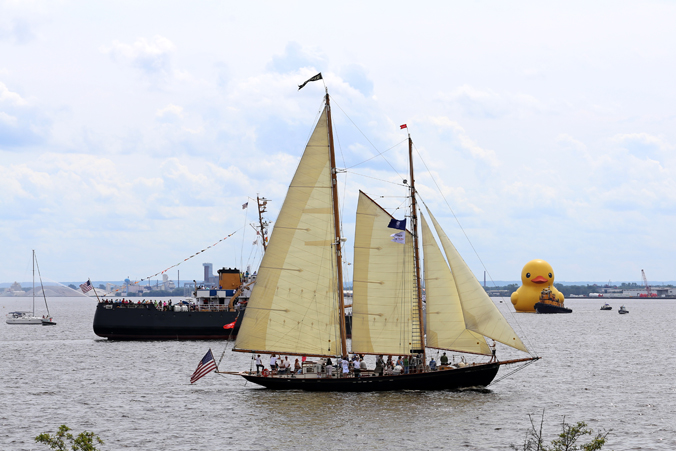 While editing the photo below, I noticed the Coast Guard cutter offering a drink of water to the rubber duck on this hot summer day.  Or at least the photo makes it look that way. 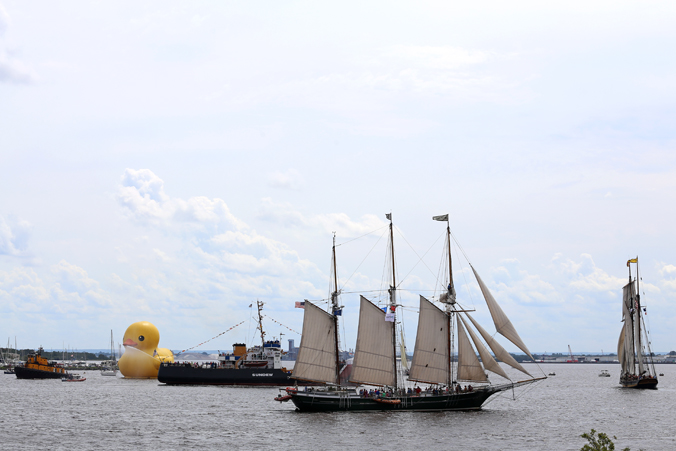 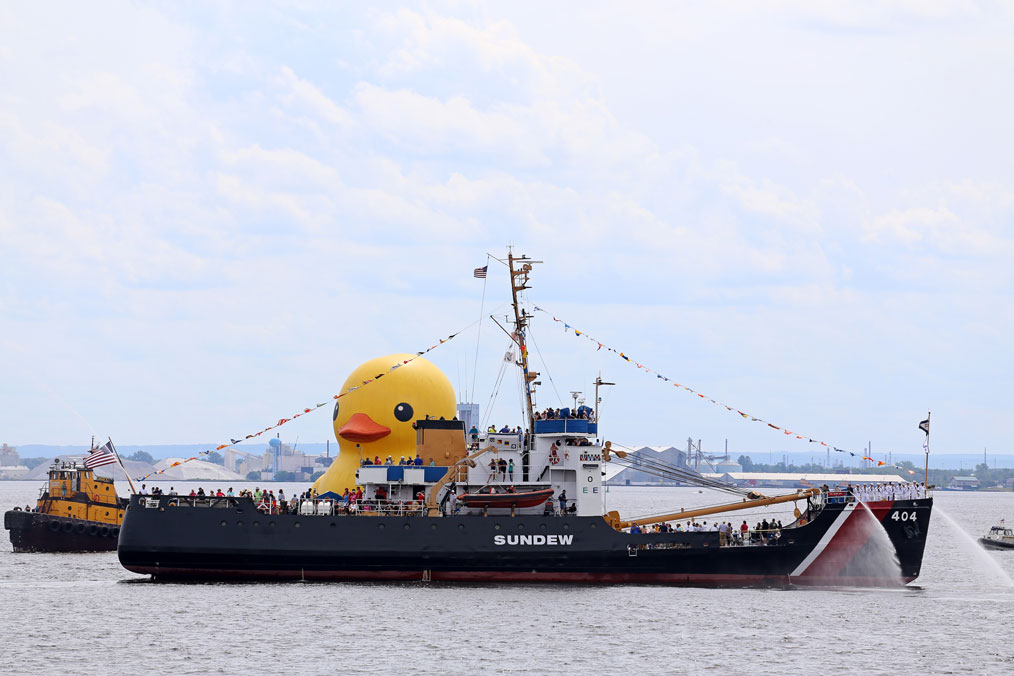 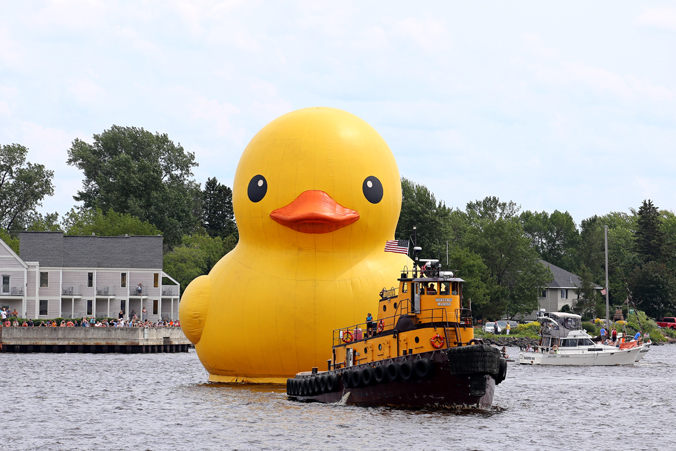 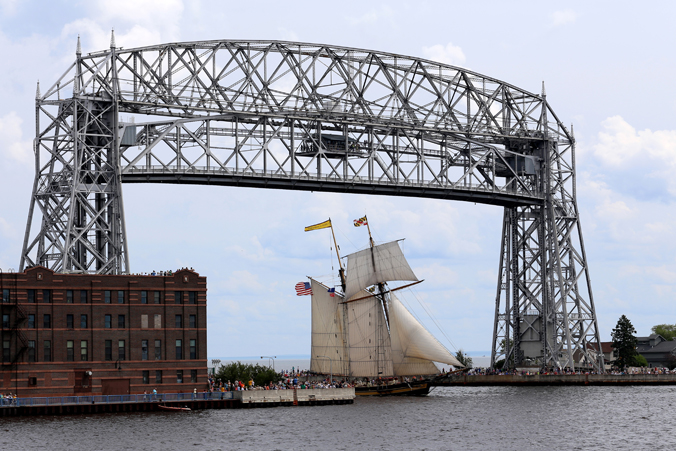 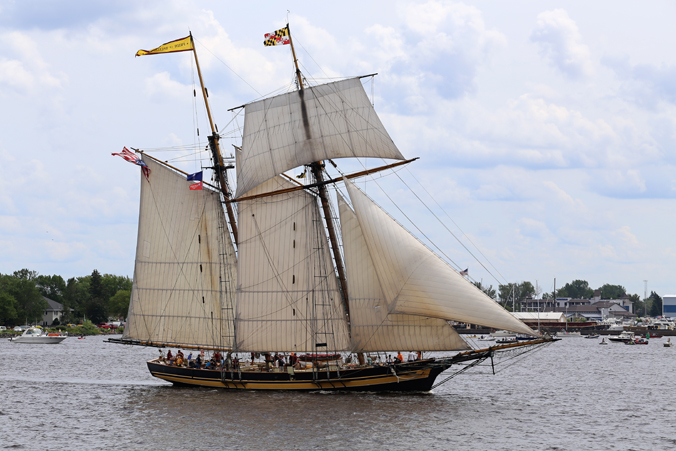 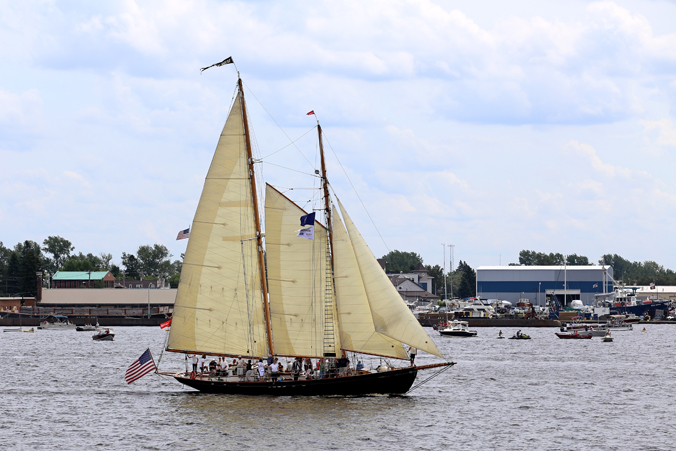 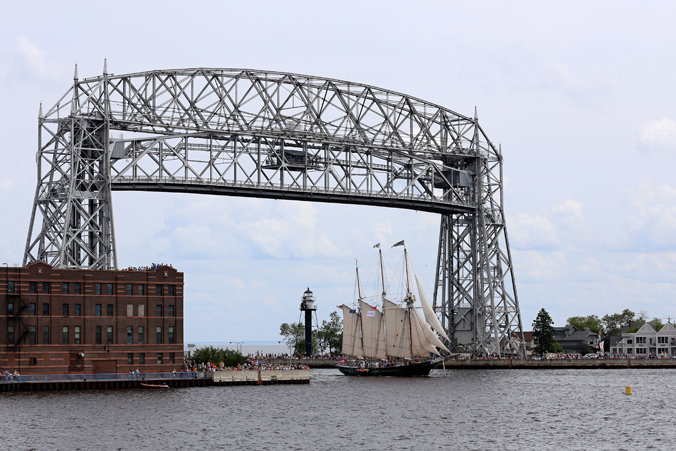 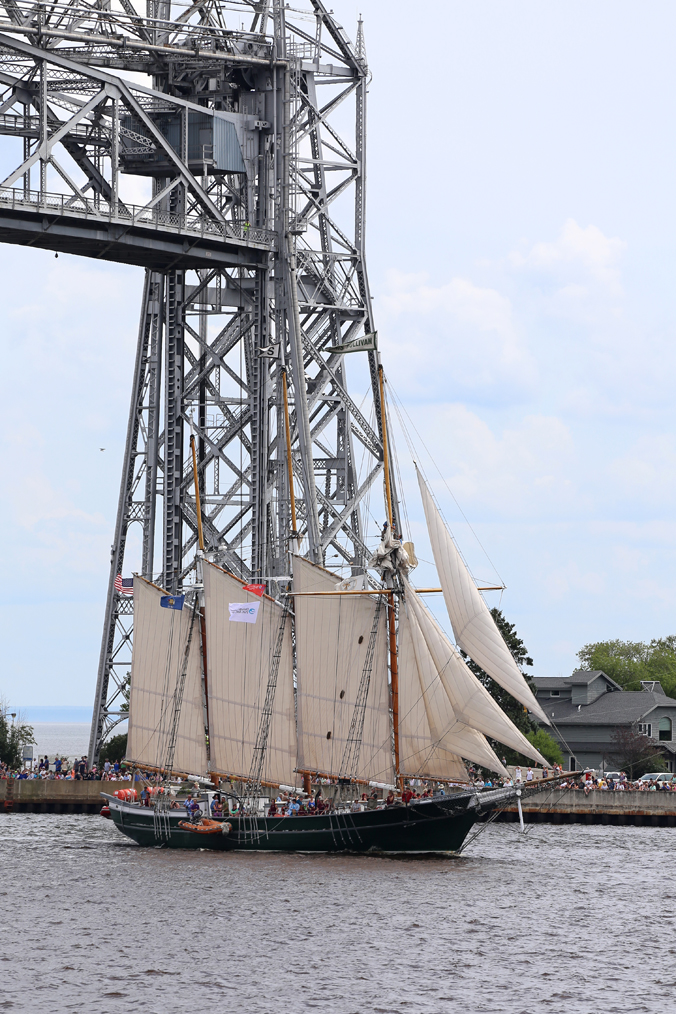 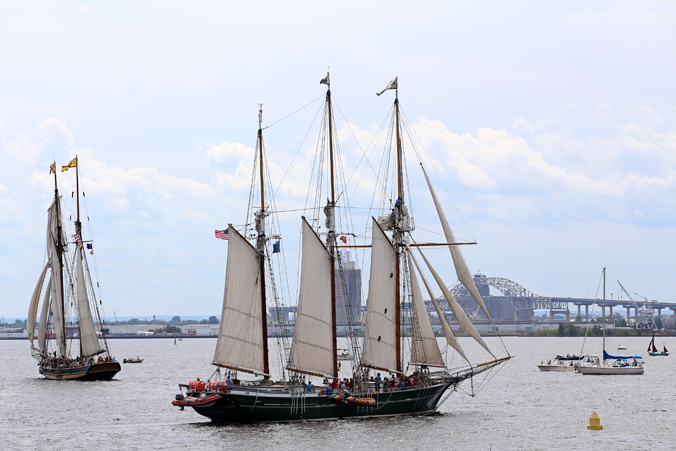 The hot, humid day changed to breezy and dark with rain drops towards the end of the parade of sails. 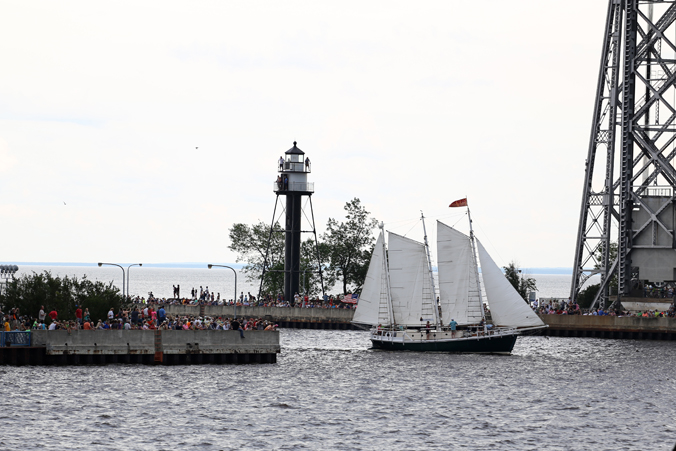 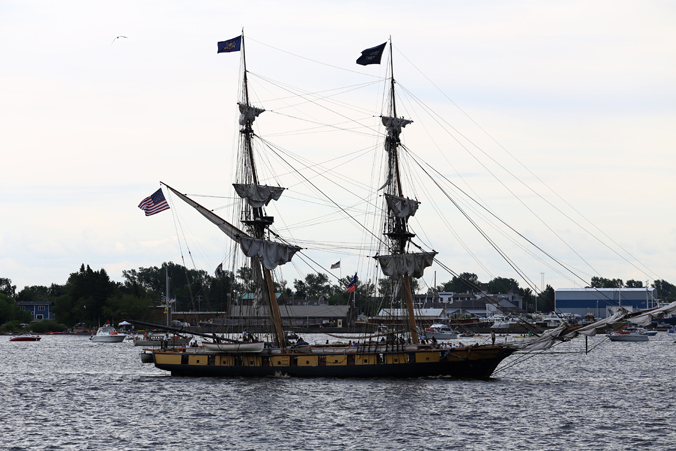 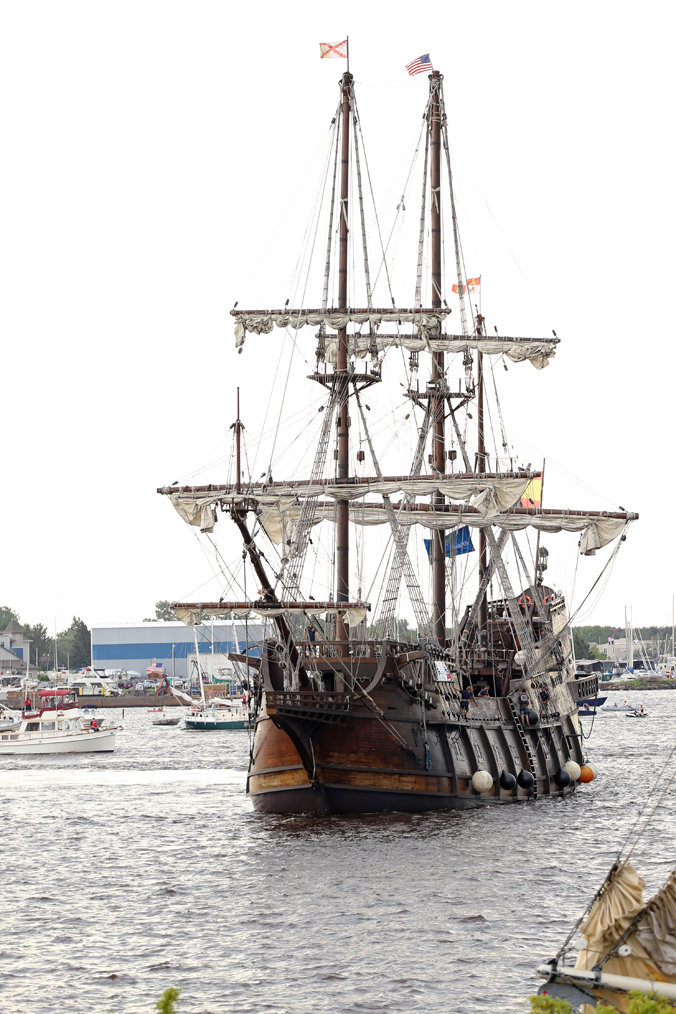 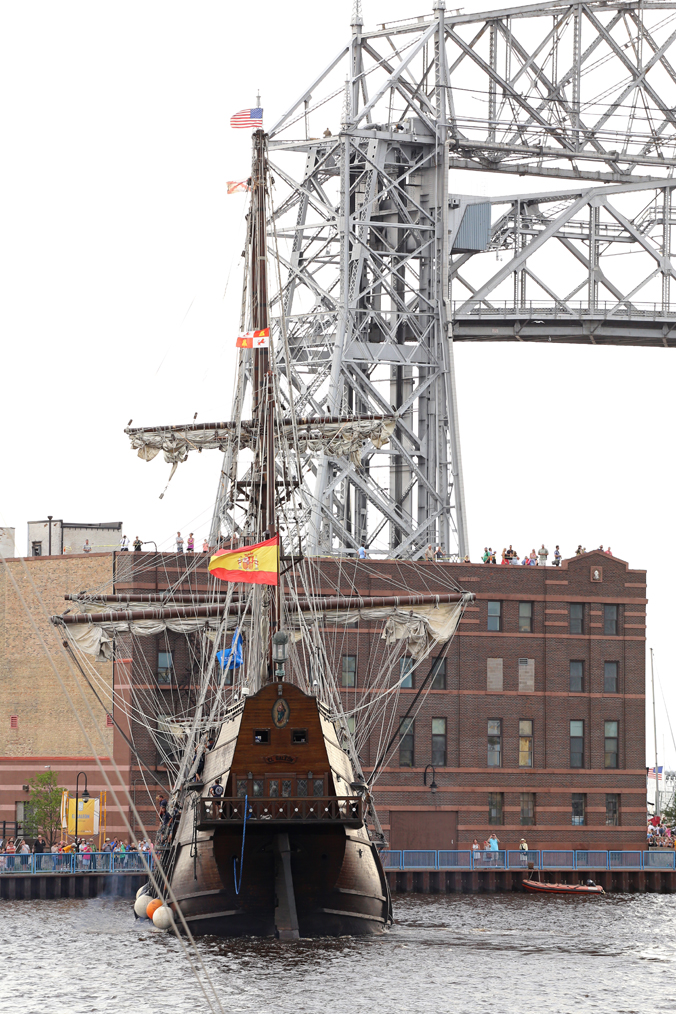 It was a nice afternoon break during a long work day.

Seven days ago, the landscape in our neighborhood changed dramatically.  A storm like none I have ever seen before crossed Minnesota leaving a path of downed trees, property damage and power outages.

We went to bed on Wednesday with the loud hum of our window air conditioner in the background.  Temperatures had been in the 80’s and 90’s during the week.  We heard that there may be some rain or a thunderstorm overnight, but had no idea what we were in for.  At around 3:25 am our power went out.  The carbon monoxide detector beeped once and then was silent.  The sound from the downpour, winds and thunder were so intense, we couldn’t sleep.  There was near constant lightning in the sky.  Not bright bolts of lightning, but flashes of light that covered the entire sky.  We could see glimpses of the city trees along the street swaying, but it was too dark to see what was happening.  The lightning strikes were intense and the thunder so loud it woke up Sophia.  We assured her it was alright and urged her to go back to bed.  At this point, we didn’t know the intensity of the storm or what was happening outside.  We checked the radar and saw the red moving through the area.  The storm went on for about another half an hour with the the lightning and rain tapering off as it moved to the west.

With the power still out, we set our phone alarms and tried to get some sleep.  I don’t know that Mike or really rested for the next couple of hours.  As daylight came, we looked outside in the backyard to see branches and leaves littering the entire lawn.  My grapevine and arbor were laying flat on the ground.  The rubber tree was sideways on the deck.  Not too bad.  We looked out the front window and the large city trees were still standing.  Looking to left, I noticed something appeared different.  A large pine tree had snapped off about 12′ from the ground.  The top of the tree laying on the border between our house and our neighbors, extending out to the street and just topping the neighbor’s mini van parked next to the curb.  We couldn’t believe that we didn’t hear when the tree fell, but the winds and thunder were so intense, the noise from the crashing tree must have blended into the roar of the storm.

We were still without power and now searching with our phones as to the extent of the storm – no travel advised.  Trees blocking roads.  Power outages.  Street lights out.  Mike checked with his work.  Not closed.  And my offices never close.  We decided to get ready for work without power or lights and see what the day held.  No coffee, no blow dryer, no warm breakfast, no closet light, no garage door opener.  The list continued.  Modern conveniences that we take for granted.  Mike opened the garage door manually and was met with the neighbors outside surveying the damage.  Reports of downed trees up and down the block and, of course, widespread power outages.

The kids were planning to spend the day with friends who lived 20 minutes away.  They had power.  Perfect.  Mike reported back after he left for work and said that trees were down and stop lights were out on the way to the highway, but if you drive cautiously, you could make it through.  He told me which roads to take and which ones to avoid due to blockages from trees.  The kids and I finished getting ready and planned to head out, but paused to take a quick walk down the block to see the damage at the neighbors.

Here is what we saw all within four blocks of our house.

This is just outside our bedroom window.

Appreciative that it missed our small raised bed garden.  Now there will be additional morning sunlight to help things grow.

At the end of our block and up the avenue.

At the end of the block, lower side of the street.

Our friends yard one block away.  The house is no longer visible behind the branches and trees.

Further down the block, the trees were even larger and created a bigger mess, blocking the street and pulling up the sidewalk.

That was just within four blocks of our house.  I didn’t photograph every downed tree and we didn’t venture into back yards and alleys where the devastation continued.  On our way back to the house, we saw no traffic.  It was impossible to pass.  Just people walking around in disbelief surveying the damage.

The storm in numbers:
Wind gusts of over 100 miles per hour.
75,000 power customers without electricity in the region.
250 power poles snapped.
Temperatures in the 90’s as clean up began.
We were out of power for 4 days.
Several friends, co-workers and my brother were out of power until yesterday – 7 days.

Below are a few more photos taken around our neighborhood in the past couple of days as things began to return to normal.

I think this is one of the largest uprooted trees that we came across. The roots nearly reached the power line above.  Most of the trunk and branches had been removed before we took this photo, but you can imagine how big this tree once was.

The base of this tree was immense.  Check out the remains in this trailer as it was being taken away.

Sophia wants our neighbor to leave this, but maybe cut it a bit shorter.

We saw this sign in our neighborhood a couple of nights ago.  We couldn’t agree more.

We will all have stories to tell for years to come.  Despite all of the destruction, we saw neighbors helping neighbors and the kindness of strangers.  We also saw humor.  Our friends down the block had several trees down, two cars damaged, power pulled from their house and garage.  They wrote large checks for tree removal, electrical repairs and will have more to write for deductibles.  They texted us at one point during the clean up and said “Well, at least we won’t have to rake leaves in the fall.”

Gratitude and humor.  It can get you through just about anything.