It all started because I was drawn to these flowers in the morning light. 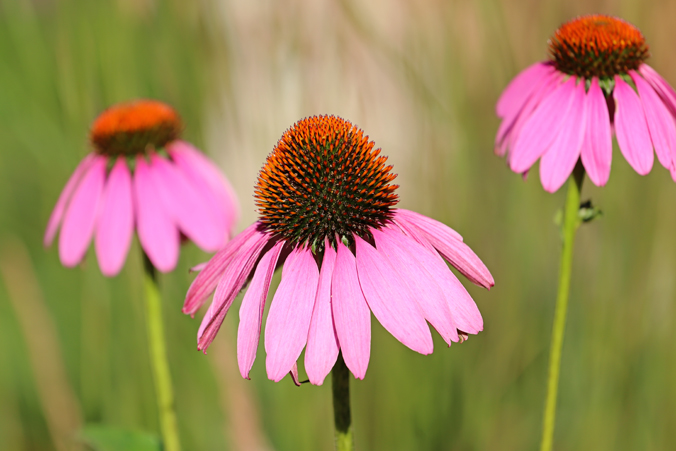 And then I spotted the monarch. 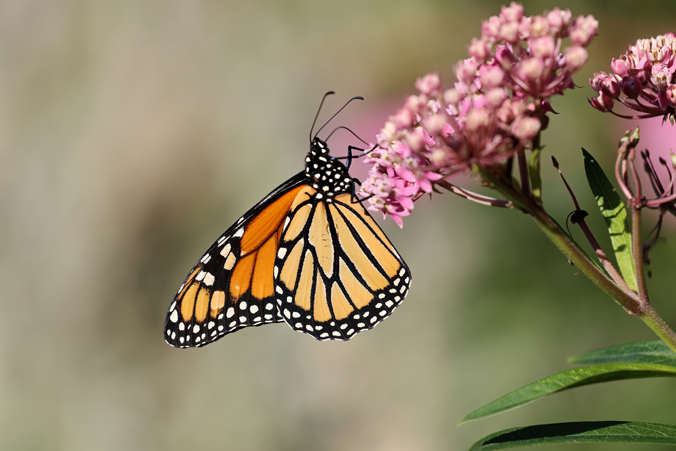 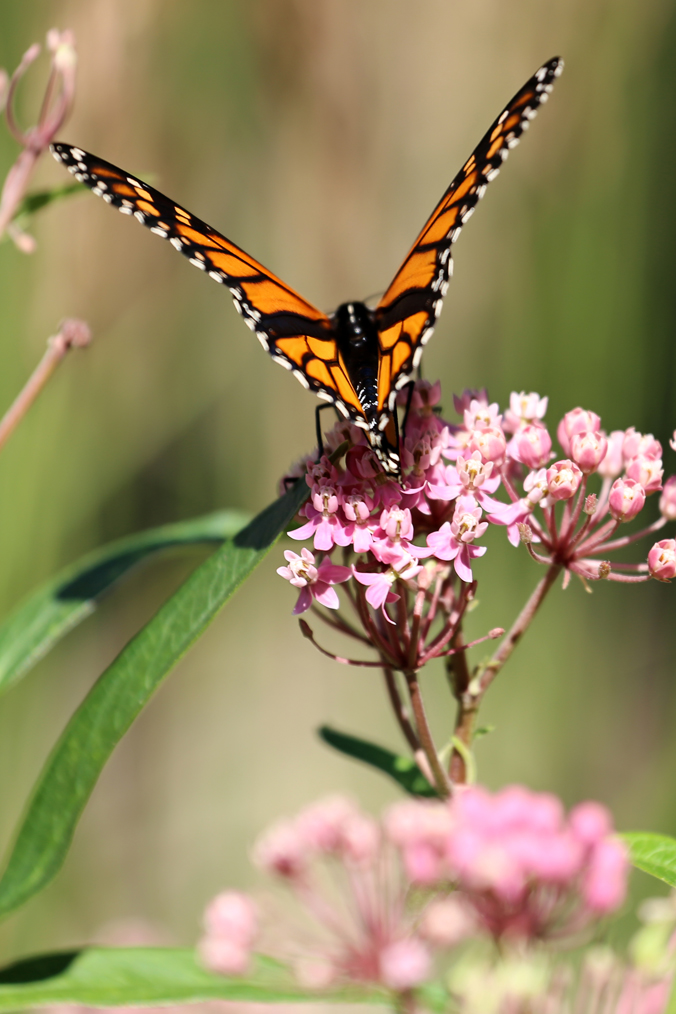 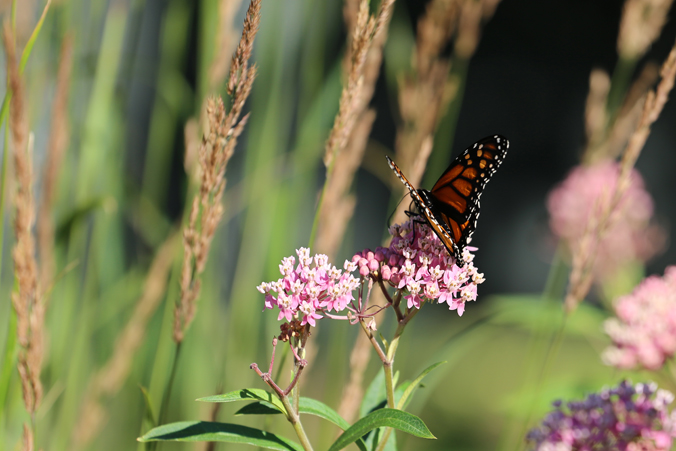 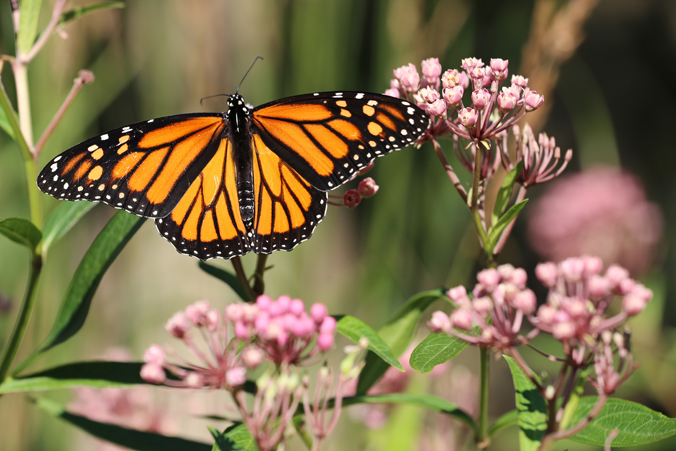 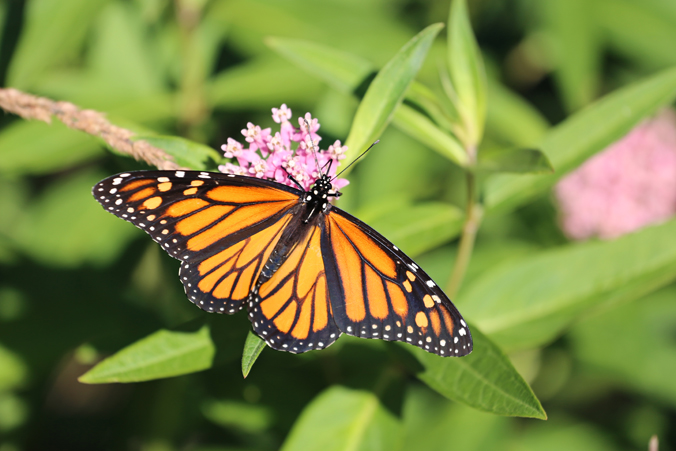 When the monarch fluttered away, I noticed the bees. 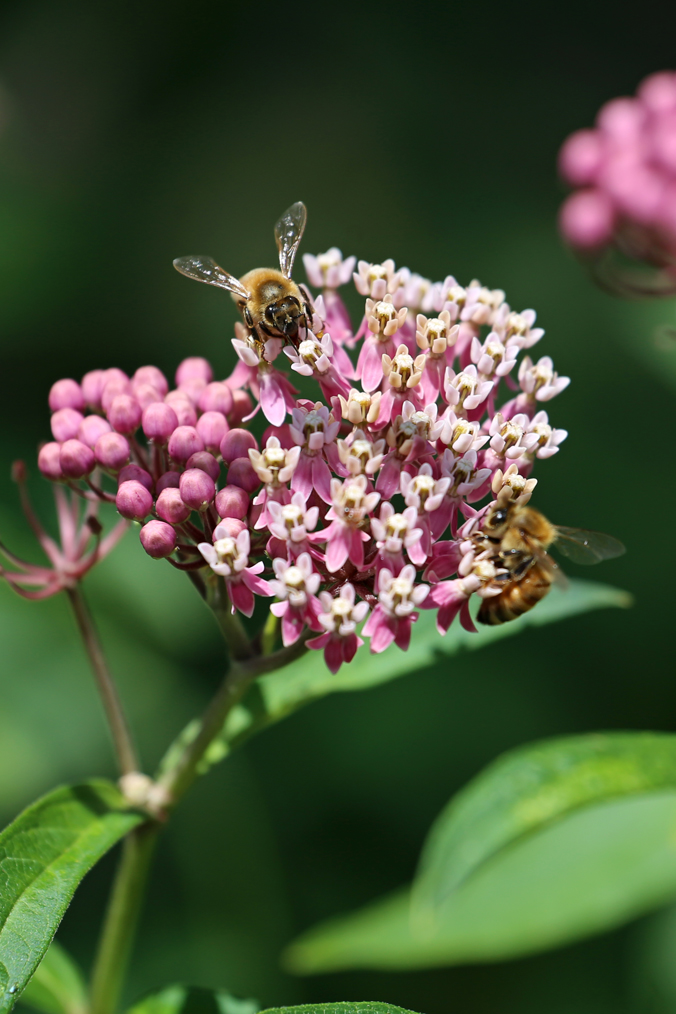 It was a wonderful start to the day.

I spotted a pair of monarch butterflies fluttering around outside and then land in our neighbor’s garden.   They didn’t want to be photographed together, but I did capture one before he flew off.

I’ll get back to the “Staycation” posts, but wanted to show some of the photos of Sophia’s most recent friend.  Sophia loves animals, birds, bugs, worms and caterpillars.  While we are at the cabin, we went for a walk down by the pond to look for baby turtles.  Instead of finding a turtle, we brought a big, fat monarch caterpillar back to the cabin.  We picked some milkweed to keep him nourished, found a big coffee can as a home to keep him safe and kept a watchful eye on him.  The next day he was hanging upside-down in a “J” which is the signal that a monarch caterpillar is going to make a chrysalis.  By the next morning our caterpillar was replaced with a jade-colored chrysalis hanging from the top of the coffee can.  We did a little research and found that it takes 9-14 days in the chrysalis stage for a butterfly to emerge.  We brought him home and kept him warm and dry in Sophia’s room.  We watched the chrysalis all week as the jade green color started to look more transparent and the outline of the monarch wings began to show through.

When we left for work and daycare yesterday morning the chrysalis looked like this.

When I came home for lunch it looked like this.

He had emerged sometime during the morning and was waiting for his wings to fill up with fluid before he could take flight.  When Sophia got home she spent some time letting him walk on her arm, holding him on her finger and watching him flap his wings practicing before he took flight.

Temperatures were unseasonably cool (low 60’s) and rainy yesterday which likely prevented Sophia’s butterfly friend from taking his flight.  We left him in one of our hanging basket plants under the eve of the house overnight.  He was still there this morning and was flexing his wings but waiting for better weather to fly away.  When we came home for lunch, he was gone.