Yesterday we brought out our knives and creativity to make this year’s jack o’lanterns. The cast of characters from left to right below are: Triangle Man, Mummy, Pumpkin Eater and Owl. 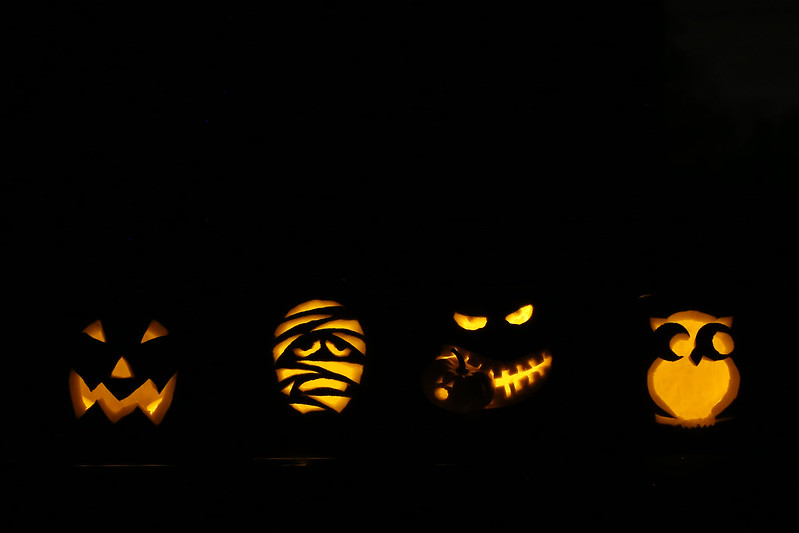 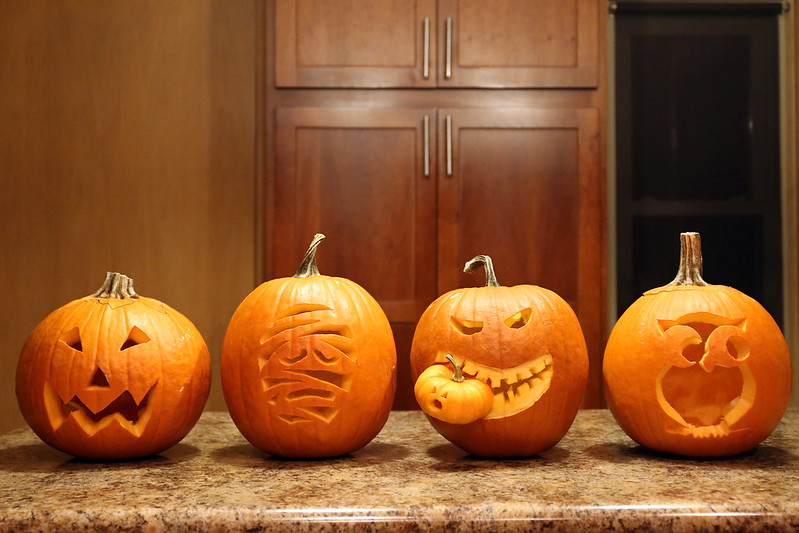 Ready for their close-ups: 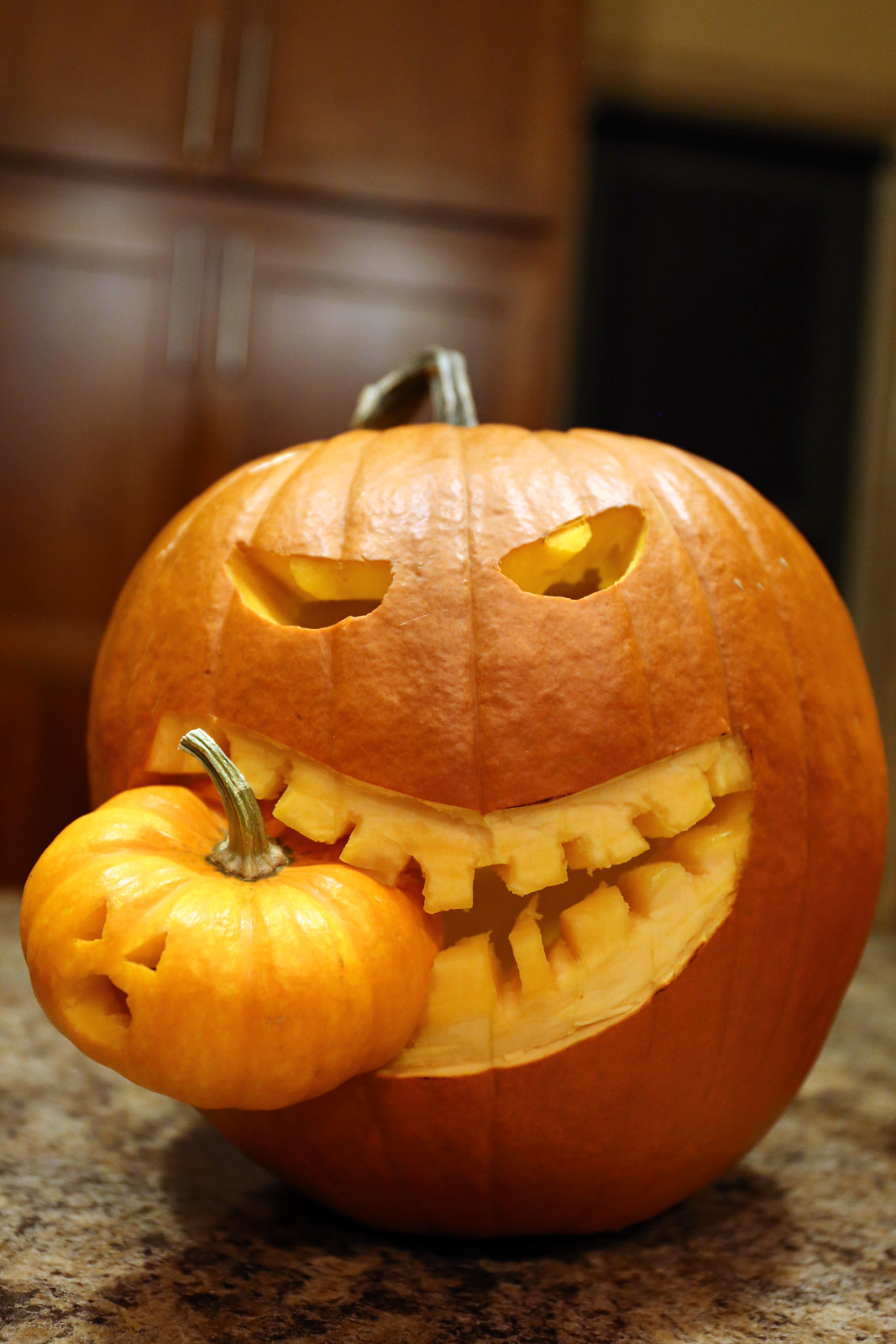 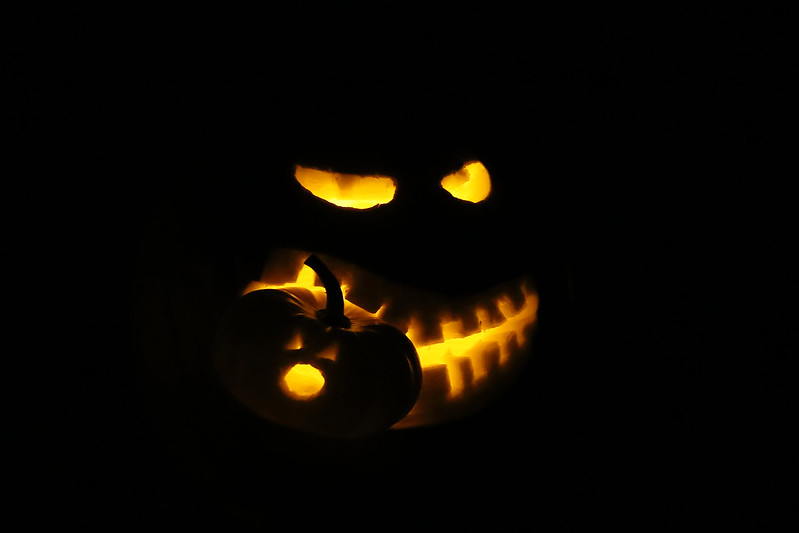 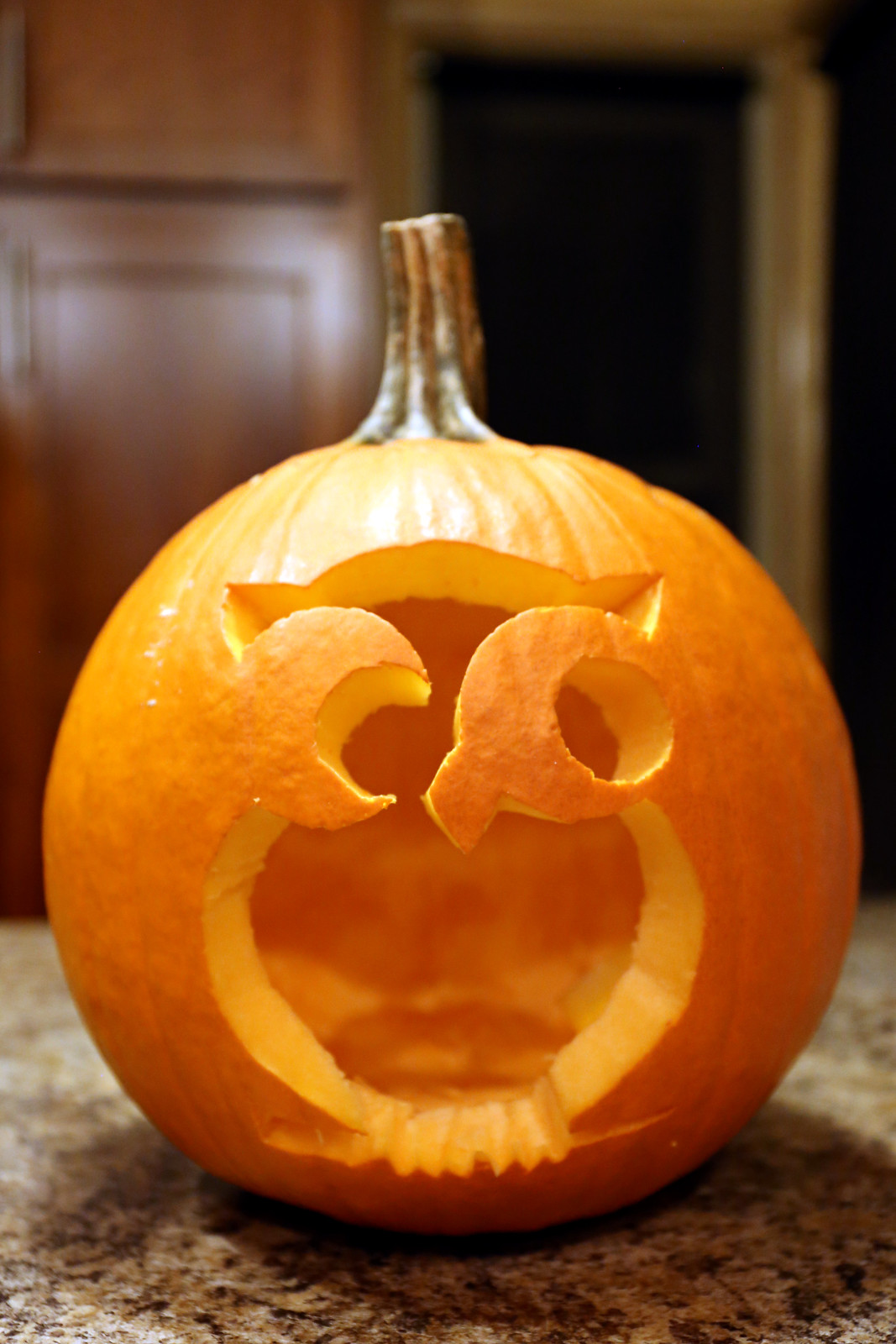 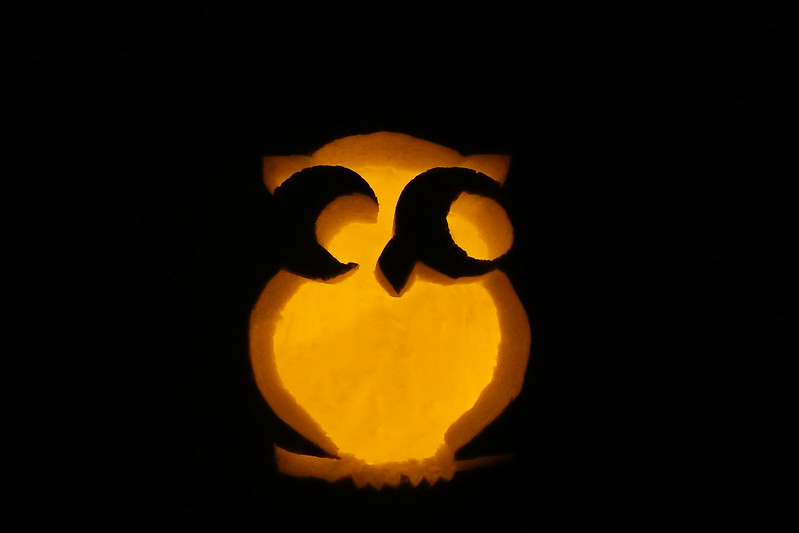 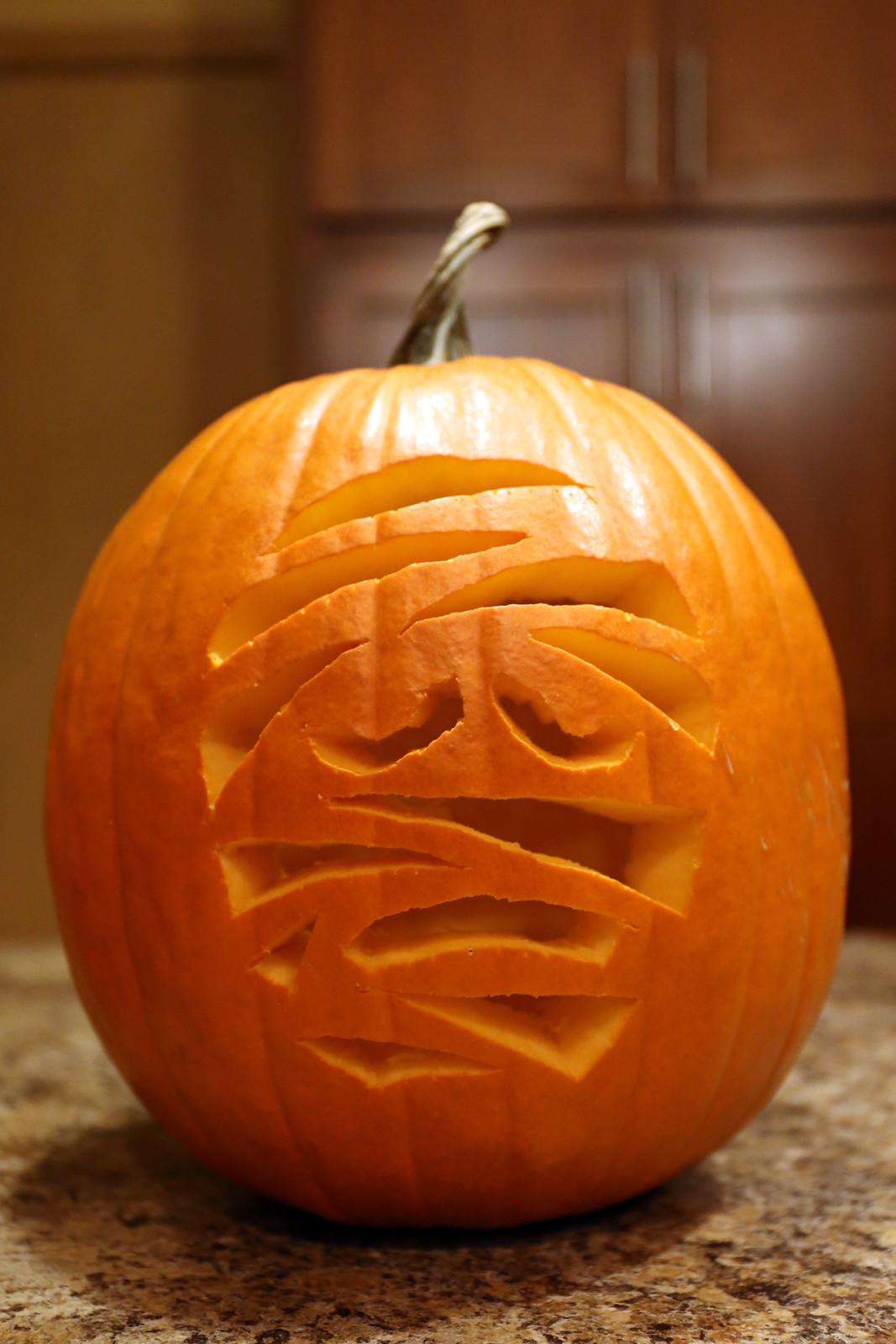 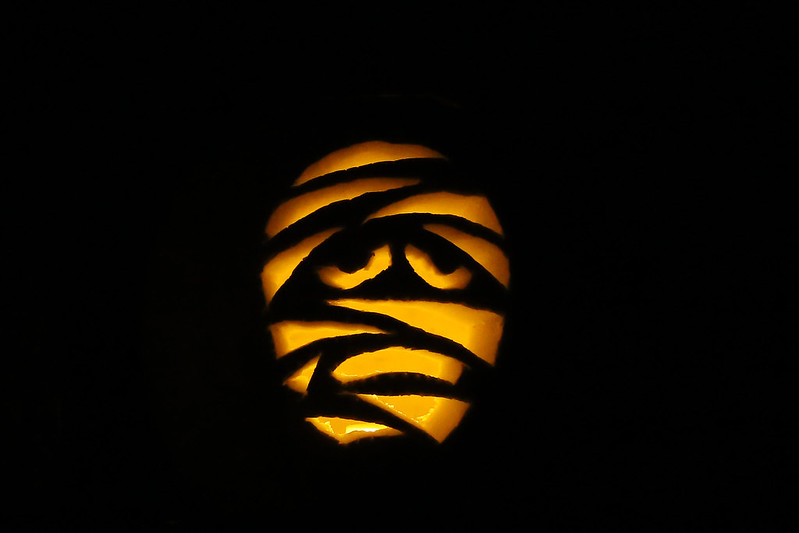 And last, but not least, Triangle Man by Mike… 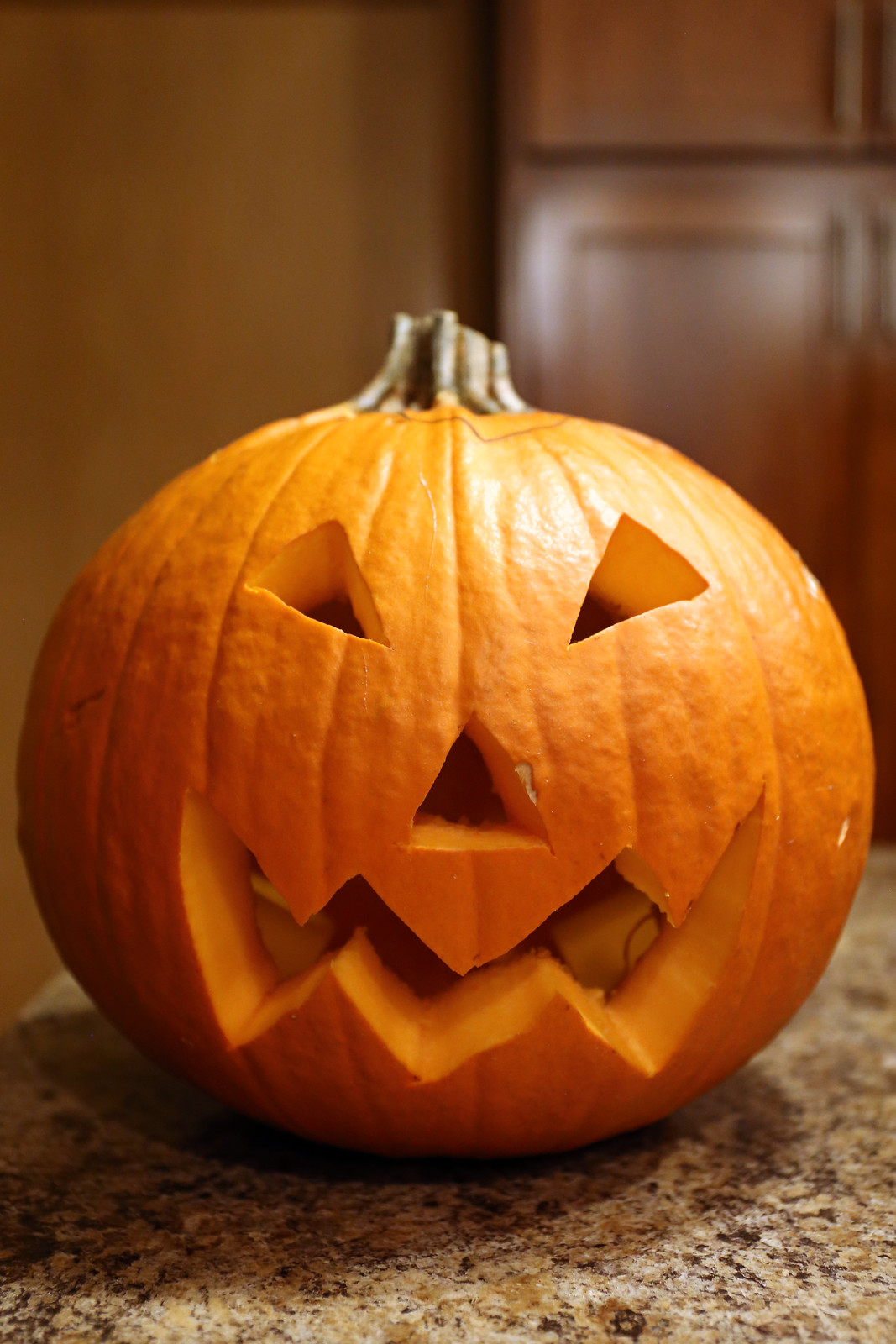 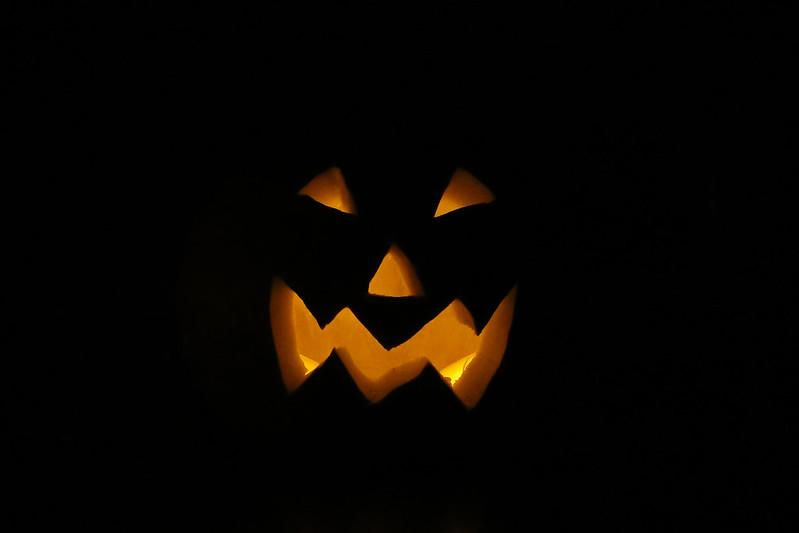 Happy Halloween everyone!  Be safe and don’t eat too much candy.  🙂

While Sebastian was away at a friend’s birthday party on Saturday, we took Sophia and one of her BFF’s to Glensheen’s Halloween Spooktacular.  We went two years and were pleasantly surprised that they had changed things up a bit.  We enjoyed touring the grounds after dark and viewing 1,000 carved pumpkins.

Here’s a description of the event:

Visitors will walk through the spooky Cottonwood cathedral, a torch-walk against the wrought iron fence to the West Gate where a mass of grinning pumpkins will greet you at the entrance of the mansion, lit for enchanted effect. Inside, witness a Pumpkin Seance contacting the spirits of old ghouls, Herman and Lily Munster and Morticia and Gomez Addams, artistically cut onto pumpkins. Then it’s down to the mansion’s winter garden to pick the winner of the pumpkin carving contest. Back outside, tour the Bridge of Sorrows where hundreds of pumpkins are fleeing in terror over the orangey/red waters.

Sophia and her friend found a number of favorite pumpkins – Frankenstein, mummy, owl and cat.

Glow sticks were for sale along the way.

The tour concluded with s’mores and a fire dancer.

We haven’t finished our own preparations for Halloween.  We still have three pumpkins waiting to be carved.  Here are the two that we carved at my Mom’s earlier this month.

Later this week we will have photos of Sophia dressed up as a fortune-teller and hopefully more carved pumpkins.

We spent the weekend getting into the Halloween spirit by attending Glensheen Mansion’s Halloween Spooktacular event, carving pumpkins and prepping Halloween costumes.  I just have to start with this photo because I think it is my favorite of the weekend.  We also found out from the veterinarian that Daphne’s tumor was benign and the margins were clean.  She is a healthy and happy Boxer!

Back to the Glenshen Spooktacular ~  With hundreds of Jack ‘O Lanterns illuminating the seven acre grounds of Glensheen mansion, we couldn’t help but go and get inspired for our own pumpkin carving.  There were many of the traditional carvings and some that caught our eye including SpongeBob, Tinkerbell, pirates, owls and other amazing designs.  Without a tripod, it was impossible to photograph the glowing pumpkins.  We did take a few photos along the way using flash so that we could capture some of the unique pumpkins.

The outdoor tour ended with roasting marshmallows over a fire pit and making yummy s’mores.  The perfect way to end a chilly evening.

Today we started the day by gutting our pumpkins and then jumped right into carving.  Sebastian and Sophia enjoyed getting their hands inside the “guts” and pulling out all the stringy mess including the much coveted pumpkin seeds.  We saved every seed so that we can roast them in the oven.  Mike and the kids enjoy the salty, crunchy treat.

Sebastian carved his pumpkin by himself.  Mike helped tape the pattern on the pumpkin and Sebastian took it from there.  Here is his finished spooky pumpkin.

Sophia chose a Dracula pattern for her mini pumpkin.

And because I needed an extra challenge this year, I chose a Boxer.  It was time-consuming, but not nearly as difficult as I thought it would be.

I don’t think Daphne was quite as excited about her pumpkin portrait as I was.  However, she did feel the need to lick the boxer pumpkin’s ears…but I guess that’s not unusual.  She licks everyone.